I've been lurking on the forums long enough I figure it's time to start sporadically talking about the game I am working on. This is now week ~7 from a no background in GameDev or modelling' guy (background is Data Vis and computer networking), so there is a lot of improvement to be had.

That said I had briefly played with Godot before and liked both the node system and GDscripts similarity with Python. Saying that Godot 4.0 can't come soon enough for 3D as there have been plenty of times I've found a tutorial for Unity which does not appear to be natively available in Godot (yet).

Premise:
The concept is fairly simple (I thought). It is about a city man and a city dog from different homes/backgrounds who both separately decide to give up on the insanity of the modern world to go live in the wild after watching the same discovery channel show.

I've fleshed out a slide deck full of my thoughts on the story and it's somewhat long, so I won't post it all here now, but tldr; the man falls off a cliff and the dog is swept down a river, both taking hefty knocks to the head. The man (the player) is then awoken by the dog savaging his ankle and the game commences.
They both quickly realise they can understand each other and decide to go about exploring the wild together, though all the while neither is fully convinced the other is actually real given they both just had knocks to the head.

At this point the dog will be used as an exposition tool for the tutorial, as well as general banter back and forth between the two, while longer-term may become a pseudo 'Navi' character though less annoying. The conceit though is that whenever something goes wrong (such as when attacked) the dog will make his excuses and leg it, adding to the uncertainty of if the dog is real.

The core gameplay loop is survival, with a goal of scaling the highest nearby mountain together to try and see where home is and/or surviving an in-game 'season.' As it stands that season is pretty much just going to be Summer, but if I ever finish this behemoth there will be multiple seasons that define the games difficulty (and of course the pinnacle being surviving a year).

But throughout this I want there to be a lot of story exploring themes of loneliness, companionship, ones own strength and the strength you get from your friends (hence the punny name), as both main characters come to learn more about themselves. Not only is this somewhat pertinent to my own adventures (I left to cycle through Japan and North America solo at the start of the year, then Covid happened), but also the world as a whole right now.

Aesthetic:
I'm severely hampered by my current lack of a dedicated GPU, and I've always liked semi-cell shaded 3D games so that's kinda where I'm thinking. This keeps the need for expensive models/textures, low as well as covers for my lack of experience in Blender.... I hope. If your immediate thought is "great another BoTW clone", honestly I wish it could be but it's not likely to be even close lol.

Mechanics:
Open world map, though the scale is obviously somewhat limited by me being one person. That said I have already created a ~5km*5km USGS heightmap of Yosemite national park into a Mesh in Blender and then 'painted'the ground onto it. This is broken into 1km grids each with different levels of LOD for distance based quality. Unfortunately the rivers I have to carve into the mesh by hand, so far from 'done': 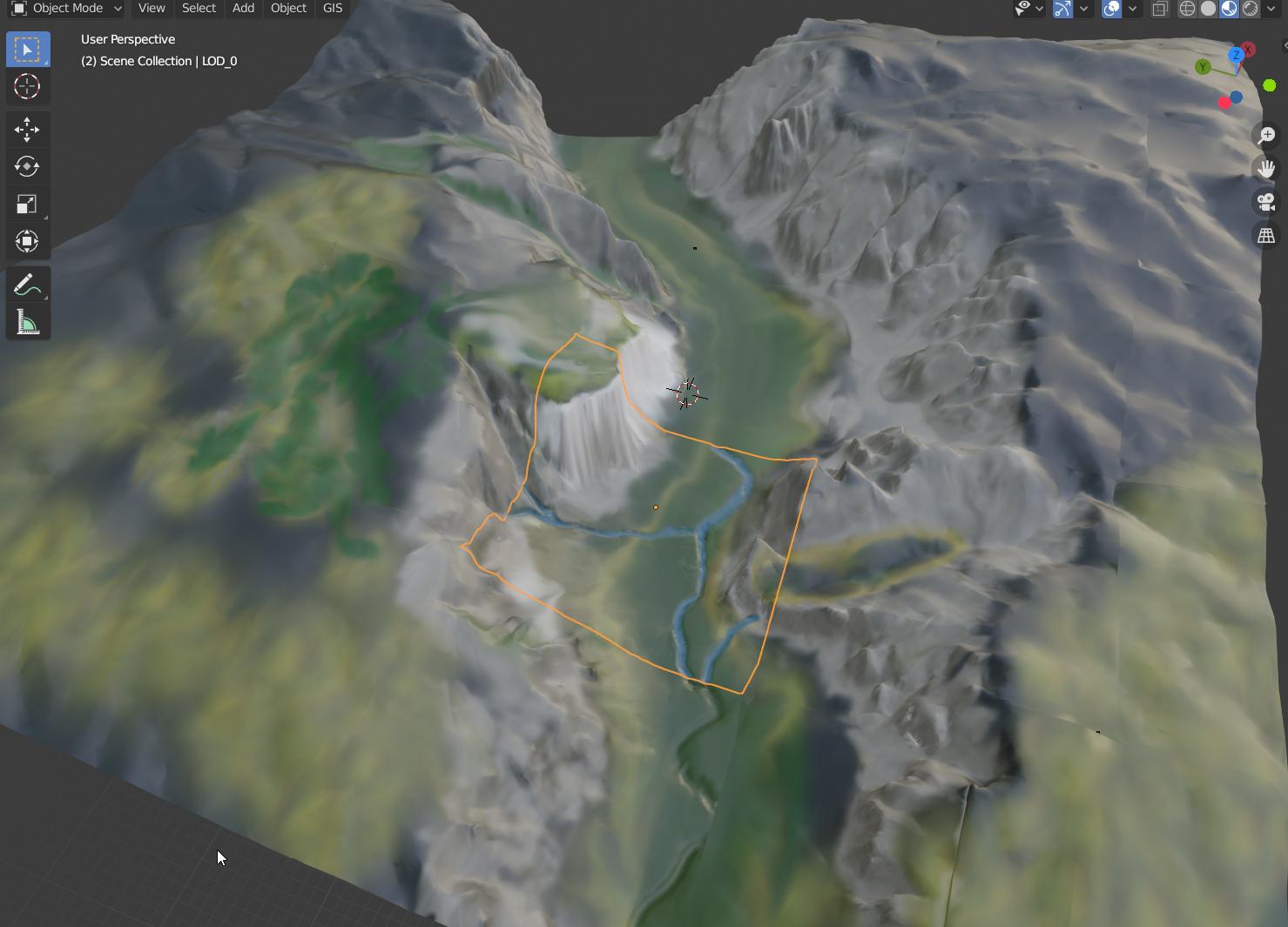 General Survival game mechanics to include hunting/gathering and some rudimentary crafting perhaps, though I have no plan to make it a craftathon like many other games. I want there to be more focus on story-driven elements with the dog and eventually, other NPCs driving the game, and a finite end screen, not an infinite sandbox (though I guess depending on the ending you can continue).

In addition I, like Jim Sterling, am no fan of excessive sliders and meters tracking your every stat, so these shall be hidden for the most part. Instead, the dog will comment occasionally on 'how you look' as well as things like your movement speed being affected over time. However, go without food/water long enough and I plan to have some kind of hallucination/fog system that gets progressively worse until it kills you.

Anyway. Enough talk. Specific bits I'm working on will be in comments below:
Thanks